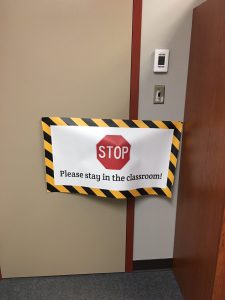 Kingston, Frontenac Lennox and Addington Mutual Aid Fire Prevention Committee (KFLA Fire Rescue) was approached by  the Limestone District School Board with an alternative solution to impede children who attempt to run out of classrooms.

Many departments have been approached by schools requesting to add additional locks to classroom doors which would contravene the Ontario Fire Code.  We were excited when approached and asked to review a sign that would be installed over doors with Velcro as a deterrent.

We recognize the need to come up with solutions to address children who may attempt to flee classrooms.

When approached by Michael Jou, Health & Safety Coordinator for the Limestone District School Board we consulted with the Office of the Fire Marshal who agreed that the proposed sign does not interfere with the intended operation of the door, obstruct the access to exit or exit door, impede the ability of a person to recognize the exit door, nor have dramatic effect in flame spread ratings.

Prior to granting final approval, we performed a test to ensure that the amount of Velcro would not prevent the door from being opened from the interior or exterior of the classroom and that the door could easily be opened with less than 90 newton’s of force.

As the sign does not poses any significant increase in fire risk, the 10 Fire Departments which comprise KFLA Fire Rescue and all of the Limestone District School Board catchment area agreed to accept the sign.

Additionally the 10 Fire Departments worked together to create a School Fire Safety Template.